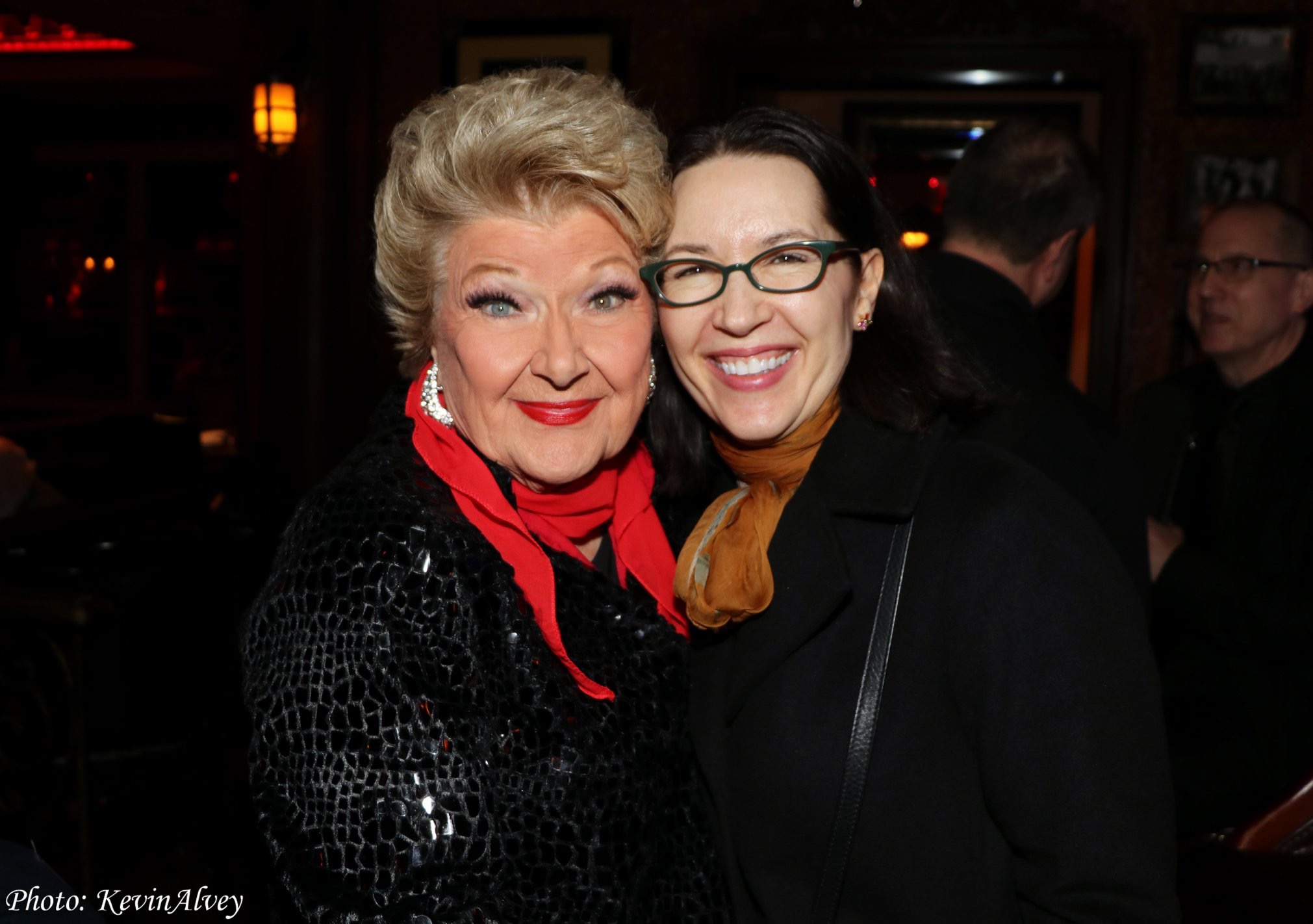 “Kati Neiheisel’s absolutely charming show, Yesterday…Once More, is a love letter to the Carpenters, the brother and sister duo from Southern California (born in Connecticut) who were known for Karen Carpenter’s unfailing, soothing contralto and a brand of pop — arranged, often written, and masterminded by brother Richard — that produced multiple Top 10 hits in the 1970s…I felt joy rediscovering the popular duo in a tribute that was well constructed, well sung, and well played by musical director-pianist Gregory Toroian, with Skip Ward on bass, David Silliman on drums, and crafted beautifully by director Lina Koutrakos…Neiheisel captures Karen’s sweetness, and she captures her soulfulness as well. She successfully tackled a tough and interesting song, “All I Can Do” (Richard Carpenter, John Bettis) from the Carpenters’ first album, Offering. Tough, because it’s written in 5/4 time, and seems out of character for Karen as well as for Neiheisel, but that’s how versatile Karen was; her drumming on that early recording is top-notch, and Silliman did a spectacular job on this. Also, tough because there isn’t a moment to contemplate vocal placement in the arrangement which clips along–you just have to come out swinging. Neiheisel totally pulled it off. It was a much different moment than the other carefully considered performances….Toroian is a monster arranger and led the fabulous trio with panache. I’m not sure who pushed Neiheisel to venture subtly outside the standard pop sound, but kudos to that person. I feel like “we’ve only just begun” to see where Kati Neiheisel can go dipping her toes into some of the very jazzy licks in this show. It was a great surprise to hear a cabaret artist sing outside the lines. The show was a terrific entertainment, full of gorgeous music and fun facts.”

A New Spin on The Carpenters

“Gratitude fills the air because Kati Neiheisel is more than equal to the task of representing the legacy of the Carpenters, and that of Karen herself…Ms. Neiheisel, a lovely and likable onstage presence, has gathered together an eighteen track show that covers Carpenters music from their earliest recordings to Karen’s very final moment in the recording studio…Kati displays a beautiful singing voice and a proficient technical ability that is enhanced by her work with Musical Director Gregory Toroian, known for his jazz arrangements, arrangements which brilliantly inform the program…Neiheisel is working with an outstanding band that includes bassist Skip Ward and percussionist David Silliman, and the relationship between Kati and the band is the strongest one in the show, even overshadowing her relationship with Karen Carpenter herself. This is actually a boon to the club act, apparently something that Neiheisel worked on with director Lina Koutrakos and Toroian, and one of the reasons the act succeeds…The creative team removed the certain possibility of comparisons to Karen Carpenter by giving Kati a series of jazz treatments that place the focus squarely on her voice, her technique, and the jazz vocabulary that she shares with Toroian…It is a musical pairing that promises to yield wonderful things in the future, as his treatments provide her warm-honeyed voice with intricate phrasing and interesting tonal opportunities that don’t just show off their respective talents, but that of the songwriters whose work they put on display.”

“Yesterday…Once More, the outstanding new one-woman show by MAC Award-nominated singer Kati Neiheisel at New York City’s Pangea, is inspired by the 1973 hit song by The Carpenters. The song is the duo’s biggest-selling record worldwide, and was specifically pointed out by Richard Carpenter to be his favorite of all the songs that he had written. In three simple words, Yesterday…Once More says so much about Neiheisel’s respectfully loving yet uniquely original take on the many, many timeless songs of the legendary brother and sister duo…If the first litmus test of live performance is to engage the audience from that very first note, Neiheisel excels with graceful gusto. She is clearly beautiful, and her voice matches her appearance. But while Neiheisel’s vocals do occasionally sound astonishingly like Karen Carpenter’s famous contralto “vox”, Neiheisel certainly doesn’t aim for imitation – not by a long shot…Ms. Neiheisel honors Karen’s commitment to perfection, but it’s obvious from the opening number that she adds a dash of artistic freedom, enhanced by her interactions with her three easy-on-the-eyes male musicians and her live audience…”

So, I’ve Heard… Something Classy, Something Holiday-ish

“Have Yourself a Merry Little Christmas” closes another December show, this one thoroughly holiday-specific. Kati Neiheisel, newish to the cabaret scene, is a major fan of Christmas music and, even if she didn’t say so, I have a feeling that you’d get that feeling with “That Holiday Feeling,” her act that left me feeling—well, merry. Sentiment is not sent away, but things never get anywhere near as sticky as icky melted candy canes. You believe her joy when she breezes her way through any of her three Irving Berlin songs (No, not “White Christmas”), she is loving and warm (“I’ve Got My Love to Keep Me Warm”), or grateful to the max (“Plenty to Be Grateful For”), or looking forward with optimism (“Let’s Start the New Year Right”). The repertoire is an eclectic mix, including things as old as carols and as recent as a few years ago (“To Be Together” by Amy Grant and Chris Eaton). With a 1970s classic, “Merry Christmas, Darling,” capable Kati, with her versatile musical tool-kit, saw her path to carve a special way through Carpenters territory, nailing the essence without hammering us over the head with the absence that makes the heart grow fonder. She respects the original blueprint but is no phone-it-in clone. Her voice impresses as the show proceeds and deepens (and it’s her deep tones and strong ending sustained ones that are especially “note”-worthy). Working with bassist Skip Ward and drummer David Silliman, musical director/pianist/arranger Gregory Toroian — a true Christmas song connoisseur/collector/appreciator — creates fond settings that allow all kinds of genres to sparkle, from “Silver Bells” (which rings true) to “Twinkle, Twinkle, Little Me” (Ron Miller/ William O’Malley), a Motown bauble. Singer friends Linda Jackson and Janice McCune add their vocals for texture and harmony and each gets a solo spot, too. Directed with style and spirit by Geoff Stoner, this Christmas banquet returned to Don’t Tell Mama on Saturday, December 14.” 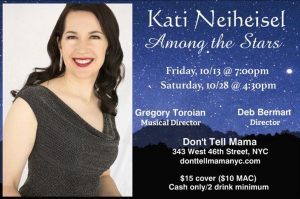 “I was curious to get the point of view of someone relatively new to cabaret, so, naturally, I turned to one of the nominees in the Debut category. I knew that Kati Neiheisel, whose So Many Stars act was one I was particularly impressed with this year, had truly cut her cabaret teeth song by song at the nominated Open Mic series at the now-closed Metropolitan Room, where she got to know the supportive open mic’s savvy singing co-host Deb Berman, who became her director, and pianist Gregory Toroian, whom she took on as her musical director. I asked the newer cabaret chanteuse what lessons she took away from doing her first full solo act after testing the waters for some time. Her thoughtful reply was, “What I learned from my debut solo show was how much work it takes to create a show! There are so many pieces to the puzzle, and you can only learn by doing. And you certainly can’t do it alone! In addition to collaborating with my dream team musical director and director, I learned so much from so many generous cabaret colleagues over the past six years. Overall, my debut show experience has been a joy! I’ve become a more skilled and confident performer, but also a more grounded and empathic person for being part of the cabaret community.”

“All roads lead to and from Marilyn Maye in cabaret. Also pointing to Kati Neiheisel’s strong showing catchable on the 21st, here we have six degrees of separation to prove the point… Deb Berman has turned her attention lately to directing and worked wonders with a talent who blossomed under that open mic’s helpfully nurturing light, Kati Neiheisel. I caught her a few times, charting progress and growing confidence and stronger stage presence. Having caught the debut of the Berman-guided Neiheisel act at Don’t Tell Mama, Among the Stars, I was exponentially impressed. Now serenely at ease on stage and her appealing singing voice and personality well presented, Kati Neiheisel returns to the venue on December 21. The set list, featuring many a song about stars and a few selections from the Barbra Streisand-starring A Star Is Born, is smart and interesting. Gregory Toroian’s musical direction is sterling. I was happily lost in the stars and give this up-and-coming singing star-in-training an enthusiastic recommendation.”